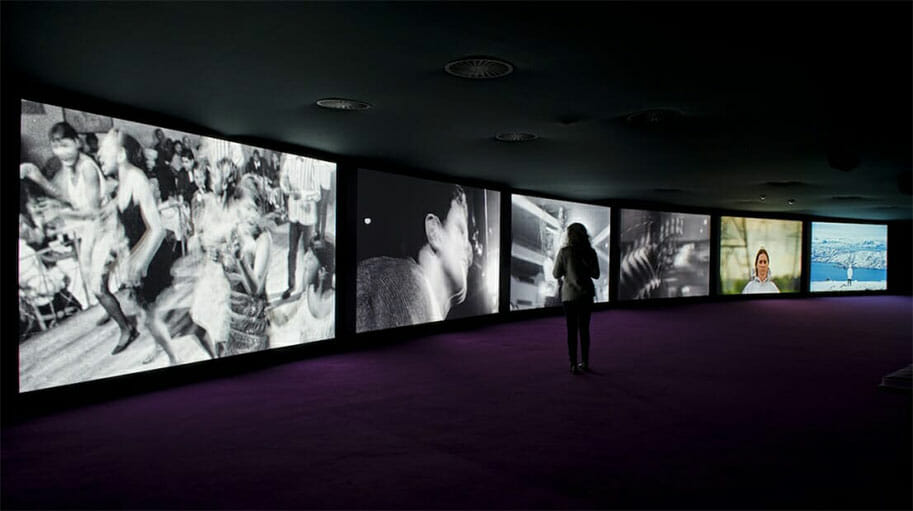 Posted at 17:27h in DCP, Deliverables, Feature Film by admin

Barbican Art Gallery presents a new commission by British artist and filmmaker John Akomfrah for the Curve. His most ambitious project to date, Purple is an immersive, six-channel video installation which charts the incremental shifts in climate change across the planet and its effects on human communities, biodiversity and the wilderness. As the follow up to Vertigo Sea (2015), Akomfrah’s standout work at the 56th Venice Biennale, Purple forms the second chapter in a planned quartet of films addressing the aesthetics and politics of matter. Symphonic in scale and divided into six interwoven movements, Akomfrah has combined hundreds of hours of archival footage with newly shot film and a hypnotic sound score to produce the video installation. John Akomfrah: Purple opens in the Curve on Friday 6 October 2017.

Staged across a variety of disappearing ecological landscapes, from the hinterlands of Alaska to desolate, icy Arctic Greenland and the volcanic Marquesas Islands in the South Pacific, each location prompts the viewer to meditate on the complex relationship between humans and the planet. At a time when according to the UN, greenhouse gas emissions from human activities are at their highest levels in history, with people experiencing the significant impacts of climate change, including shifting weather patterns, rising sea levels, and more extreme weather events, Akomfrah’s Purple brings a multitude of ideas into conversation including mammalian extinctions, the memory of ice, the plastic ocean and global warming.

John Akomfrah said; “The Curve is one of the most challenging international arts spaces I know of. And I feel both blessed and honoured to be exhibiting here. The challenges ahead of us, of how we treat the planet and relate to matter and beings are daunting and hyperreal. I hope these works contribute in a small way to some of the very necessary conversations we need to have about the uncertain roads ahead.”

Jane Alison, Head of Visual Arts, Barbican said; “I am especially delighted that London-based artist, John Akomfrah, is creating a new film installation for the Curve; the second chapter in his planned quartet of films following his highly acclaimed three channel film, Vertigo Sea (2015). This will be Akomfrah’s largest art installation to date. As an artist who confronts major issues through his filmmaking, Akomfrah will address the perils of global climate change in this new work which is sure to be unmissable.“

Akomfrah’s films are characterised by a rich, multi-layered visual style, which frequently combines contemporary politics with history, fiction and mythology and are typified by their investigations into subjects such as memory, identity, post-colonialism and often explore the experience of the African diaspora in Europe and the United States. His first film Handsworth Songs (1986) focuses on the riots in Birmingham and London through archive footage, documentary photographs and newsreel. Recent works include Tropikos (2016), which explores the displacement of millions of African people across the Atlantic to Britain in an experimental costume drama set in the sixteenth century, Auto Da Fé (2016), a poetic period drama which presents a series of eight historical migrations over the last 400 years and The Airport (2016) a three-screen installation which references the work of filmmaking greats Stanley Kubrick and Theo Angelopolous. As a paen to the ocean, his three-channel video installation Vertigo Sea (2015) explores a range of histories from whaling, international migration, the trans-Atlantic trade and the beginnings of globalisation.

Born in 1957, Accra, Ghana, Akomfrah lives and works in London. A founding member of the influential Black Audio Film Collective (1982–1998), his work has been shown in museums and exhibitions around the world including the Liverpool Biennial; Documenta 11, Kassel; Centre Pompidou, Paris; Serpentine Gallery, London; Tate Britain, London; Southbank Centre, London; Bildmuseet Umeå, Sweden; Eli and Edythe Broad Art Museum, Michigan; and The Museum of Modern Art, New York. A major retrospective of Akomfrah’s gallery-based work with the Black Audio Film Collective premiered at FACT, Liverpool and Arnolfini, Bristol in 2007. His films have been included in international film festivals such as Cannes, Toronto, Sundance, amongst others. Earlier this year, John Akomfrah won the UK’s leading prize for international contemporary art, Artes Mundi 7.