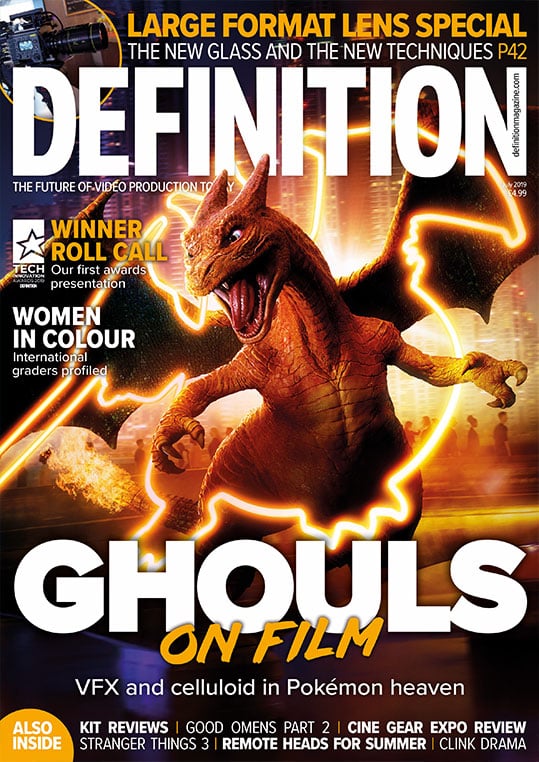 Definition magazine caught up with Rich Simpson this month to find out about the workflow on BBC and Amazon’s Good Omens.

Here is the interview in full:

• Had you read the books before production started? What did you do for research?

I hadn’t read the book of Good Omens but my brother-in-law had enjoyed it so much in English he re-read it in Greek! From talking to him I knew it was going to be great project to work on from the start. I had also been following Gavin Finney’s work since Wolf Hall so we were very keen to work with him on this project.

• How did your brief develop working with Gavin Finney? Did he already have strong visual ideas? Did any present challenges?
• Did you do any quick colouring?

Before the shoot began Gavin was very clear that he was looking for a different look for each of the different time periods in the story. He suggested using Film Convert, and during the test sessions we experimented with different looks and locked these in before shooting began.

We were primarily shooting on 2 x Alexa SXTs for the main unit with 2 x Alexa Minis for the Steadicam shots, but additional cameras were thrown into the mix on a daily basis. Gavin was monitoring with ARRI LCC look and this signal was sent to video village and as a direct feed to our mobile lab.

We made on-set colour adjustments for the dailies in Davinci Resolve. We always began by applying the look directly from the camera metadata and then adjusting from there.

Some exterior scenes were shot over the course of several days. One challenge we faced was to balance the shots across the scene accounting for varying weather and light conditions so that it would make sense in the dailies and in the edit. There is a section of the story that takes place in a storm and it was essential that we developed and applied looks to compliment the on-set weather effects.

One particular challenge was a tracking shot of Anathema (character) travelling through the forest on a bicycle. This was shot day-for-night, so we had to make this colour correction to the dailies. We also had to apply a dynamic grade in order to take into account the change in light created by the foliage as she moved through the forest. Another interesting shot to work on saw Aziraphale (character) pulling an imaginary cord and the scene needed to turn from night to day within the same shot. We set keyframes and applied a dynamic grade to every clip so that this effect was there in the dailies when they were uploaded that night. We were creating reference videos for Gavin which he was able to watch on an iPad and sign off as we went along.

• What was your workflow for compiling the digital footage? What equipment and software was used?
• Is there anything else you’d like to add on the technical side?

We realised that shooting Good Omens would involve hundreds of location moves and managing a lot of 4K material for delivery on Amazon Prime. With this in mind we designed our Hijack mobile lab to make sure that we had an independent powered system with a calibrated grading environment, and the computing power to handle the large amounts of data processing required.

Moose Kruizenga was managing data on the shoot. We carried out xxHash-64 checksum verification to twin RAID-6 arrays. We had a dual Mac-Pro system configured over a network. One system was primarily used for colour adjustments and the other was used for data management and to create daily LTO backups on location. LTO tapes were stored off-set and a shuttle drive of transcodes went off to the edit team every night on wrap.

All transcoding took place on set, and so this networked configuration meant that we could render on both systems simultaneously whenever a few extra cameras turned up! Because the lab is independently powered it also meant that we could switch over from mains power to the engine without interruption, and then move to the next location continue archiving and processing material while we moved.

• Who else did you collaborate with on-set?

We spoke with the edit team every day. It was great being able to respond to their requests and to send them reference clips from remote locations using the Lab’s in-built 4G mobile broadband antennae. We also worked very closely with the VFX team – Jean-Claude Deguara and David Jones – from Milk. There is a lot of VFX in the series (I think around 1200 CGI shots), and so we were able to create initial reference composites and even sky replacements so they could demonstrate to Gavin and Douglas (McKinnon – Director) how the VFX would look in post.

• How does Good Omens compare to other projects you’ve worked on?

We really enjoy taking on technical challenges, and Good Omens had its fair share. But the results look great and I can’t wait for people to see it.